A Brief History of the Motorhome – Part 1

When a person thinks of a motorhome they think of the bus-type vehicle with comfortable beds, built-in kitchen and hot running water, very much like the motorhomes you can hire from Camperfun.  However, the luxury we have come to expect has taken time to evolve so here is a brief history of the motorhome.

In this first part of our brief history of the motorhome, we will start in the early 1900’s and take you to 1966. 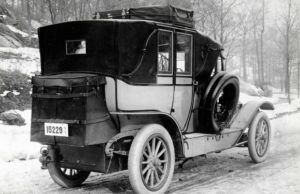 The very first evidence of a motorhome, or as our American cousins like to call them “RVs” was in 1910. The Touring Landau showed its face at Madison Square Gardens in 1910. It was far from what we would call a Motorhome today and was truly little more than a powered stagecoach.  It had few creature comforts with just two folding benches as beds and the ever faithful chamber pot when you needed to see the call of nature. 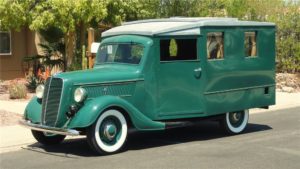 The Landau was primitive and by the mid to late 1930s motoring, in general, had improved, motorhomes themselves were still basic. In 1937 the Ford House Car appeared and was to become the foundation of the motorhomes of today. It had few creature comforts but did have a fold up bed and space for a desk. The Ford House Car was quite tall and very van-like and introduced the expanding roof that is still a feature of some motorhomes today. 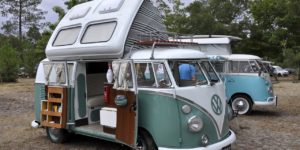 It first appeared in the late 1940s and was the result of Adolf Hitler setting Germany on fire with the Peoples Car that became affectionately called the Beetle. The VW Camper, with its stylish good looks, superb practicality and powerful but economical engine is perhaps the most loved motorhome of all time. The vehicles had impressive space with room for a bed, space to cook on a gas stove and more. The vehicles were not just reliable but also practical and beyond versatile. The expanding roof from Ford was soon introduced and by the late 1960s everyone started to appreciate that a car could be lived in for a holiday niot just driven for a day out. 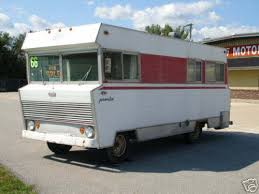 By the 1960s motorhomes were things that more people desired to have, an RV in the USA was as much a status symbol as a sports car second perhaps only to a private jet. Winnebago are still making one of the top selling Motorhomes in the world today and they were the first, in 1966, to introduce the creature comforts we expect today. With improved engine performance, a greater understanding of design and advances in technology Winnebago took a leap of faith and placed all the creature comforts of home on four wheels. A real kitchen with a real stove, real beds and a proper entertainment system saw the Winnebago motorhome sell in its millions pioneering the path for the motorhomes of today.

Coming in part 2 of our brief history of the Motorhome we will kick of in the 1970’s, go large in the 1980s and take you through to what you can expect in a motorhome today and in the future.

A Brief History of the Motorhome – Part 2 →